I am not outraged, offended, nor trying to censor FREEZEPEACH when it comes to TVNZ’s newly-announced channel, DUKE.

I’m puzzled about whether this is a Man Channel or not.

When first announced, though yet unnamed, TVNZ’s marketing was entirely clear:

The channel’s content has been specifically chosen to resonate with a male audience, after market analysis indicated male viewers were seeking “more distinctive content”.

But then you look at the lineup of shows, including Agent Carter, Gotham and Brooklyn Nine-Nine, all shows celebrated for diverse interesting casts and complex storytelling and critique of traditional male-focused storytelling – and you think, “in what way is this a lineup skewed towards men?”

But then they told us it was called DUKE and everyone went “okay so it sounds like a slang term for shit combined with a Lynx deodorant fragrance, pretty manly.” And TV One referred to the new channel as their “little brother”.

But then they insisted via Twitter that this was all a misunderstanding and of course girls would be allowed in the clubhouse.

@LI_politico definitely not just for men. We're here for everyone

And then they rolled out the hilarious transphobic advertising. 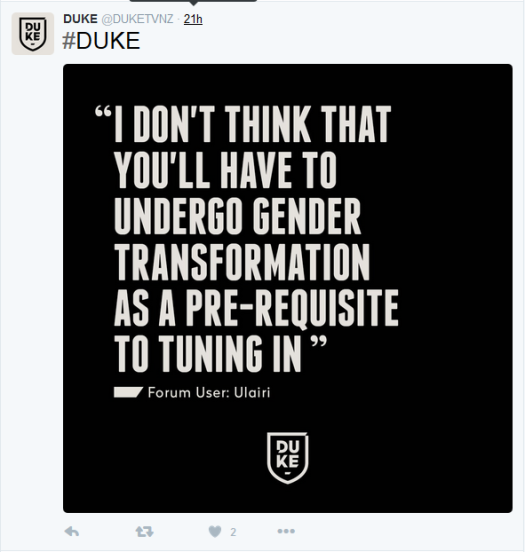 See, it’s funny because they aggressively marketed themselves as a channel for men and then people thought this was excluding women but then someone made a joke about forcing people to live as the wrong gender which is hilarious because lol trans people.

So it’s a man channel for manly men, and my thoughts when TVNZ first announced it seem pretty on the nose:

Kinda funny how when feminists discuss sexist portrayals of women on TV you can't move for dudes crying "but MEN are portrayed badly TOO!"

We could be totally wrong. The Man Channel might be chockful of thoughtful content and treat men as complex intelligent beings.

I’m puzzled as to who the heck thought this was a good idea.

Although Alex Casey of The Spinoff has some great suggestions.

I’m puzzled about the weird naivete of TVNZ’s market researchers.

Then there’s this defence of DUKE’s targeting from Jeff Latch of TVNZ:

“When you look at all of the big networks, they’re all female focused, female-skewed.”

“This one swings the other way,” he said.

I am not a social scientist but good gravy there are problems with this line of “reasoning”. Like the fact women are a majority of the population, and we’re a demographic more likely to be at home during the day watching TV because of patriarchy.

It doesn’t follow at all that this means current TV content is deliberately “skewed” towards women viewers. Has TVNZ really created an entirely new channel because a couple of dudes in focus groups complained that they were sick of their girlfriend watching The Bachelor all the time?

I’m puzzled by how massively they missed the point.

Here’s the thing. Free-to-air TV is struggling around the world, for many reasons, including illegal downloading and legal streaming services. But people do still watch TV. On the exact same day TVNZ announced they were launching a Man Channel I was whining on Twitter because I nearly missed the latest episode of Supergirl on TV2 due to crummy advertising and a MySky botch.

You know what’s going to drive me to download shows? When I miss them on free-to-air because you don’t make it easy for me to know what’s on. Or when you don’t show them at all.

Look at the “distinctive content” TVNZ was seeking for DUKE. Look at NFL, professional wrestling, Brooklyn Nine Nine, Gotham, Agent Carter (I’m ignoring the ridiculous men-with-heavy-machinery offerings because I already fill that need with Gold Rush). First off, this is basically a channel designed for me and we all know I’m a rabid man-hating feminist.

Secondly … this is exactly the kind of content our free-to-air channels should have been showing for years but haven’t. Sorry for the overuse of italics, but I could’ve told TVNZ that this was the kind of content they needed to be showing off the top of my head.

Gosh, why would people switch off that magnificent bounty?

Now you offer cutting-edge comedy, massive pop culture icons, and previously-unavailable sports events … and you bloody ruin it by playing juvenile “ew girls are gross, we need to hide in our man-caves watching man-shows with our man-friends” games?

TVNZ, my darling. You didn’t need to market DUKE as “a channel for manly men with their distinctive man interests”. You just need to tell people “Hey! Here are a bunch of sports you love, which have never been free-to-air. Here’s a selection of premium TV shows at a minimal delay from their US broadcast, which you’ll put up with for the convenience of not having to find a good torrent or canvass Twitter to figure out which streaming service has it.”

Here’s my dilemma. DUKE may well be a success, despite its erratic and confusing marketing, because it contains good content. Which will just reinforce this ridiculous idea that in 2016, we need to cling to a black-and-white gender binary to sell products.

I want to be optimistic though. Maybe they’ll pull a season-2 “replace the main actor and introduce a cute child character” rebrand at some point and DUKE will become TVNZ Awesome or something like that.

I will be wanting a cut, though.

I have no doubt "market research" shows there's a gender split in entertainment. Because we live in a patriarchy.

Why "male-skewed"? Why not, "channel for people who like sports and action movies"? Why not frame it as TVNZ Action rather than TVNZ Penis?

(Please note: Not all men have penises, not everyone with a penis is a man, gender isn’t a binary, and that’s the entire problem!)

One Reply to “DUKE: I have questions”