This image, shared by Tony Veitch himself: 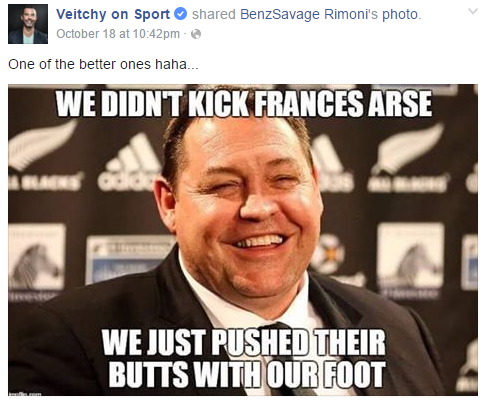 This image shared by a fan of the page, liked by 11 people, and not moderated or removed 12 hours after it was posted:

And this self-pitying tirade by Veitchy, referring to his struggles “rebuilding his life and career” after “what was a hideous relationship”:

Then there’s this post (now deleted; see below) accusing media who are reporting this story of just being jealous because he turned down a job offer.

Things you can’t see on Tony Veitch’s Facebook page right now, or ever

This cannot surprise us. This is how our society treats violent men who have the privilege of whiteness and an association with the cult of sport.

Take this 2013 article about how awesome Tony Veitch’s year was. It never mentions that he broke a woman’s back. It talks about a “bombshell” – but only in reference to the hush money he tried to pay his ex partner. And only after 8 paragraphs painting him as a tragic hero, fighting so hard to rebuild his whole life after … well, nothing really, just “one charge of injuring with reckless intent.”

And check out this bio on the Newstalk ZB website:

Maybe Tony Veitch is no longer the kind of guy who allegedly chases his partner through a house, pins her to beds and punches her. But he is a man who casually uses violent language. A man who is utterly, utterly unrepentant about his own violent history. A man who jokes about violence and encourages jokes about violence. A man who stands as an example of what you can get away with if you’re rich, famous and white enough.

Not only was his “apology” a litany of excuses. Not only was he almost immediately granted “a second chance”. He now, unapologetically, deliberately, defiantly encourages people to joke about violence, including domestic violence against women. He is an active creator of toxic masculinity.

He may not be a direct threat to the women in his life, now. But he’s a danger to every woman in society.

6 Replies to “Tony Veitch is a danger to women”