"Let's put this to rest, this is a state responsibility". @AnneTolleyMP rules out more outsourcing of frontline cyf services

A National Party minister admitting that the state has responsibility for something? Ridiculous!

Of course there’s a sting: the way “frontline” services are specifically mentioned.

This is another of the great National Party myths: that frontline services are vital, important, definitely necessary – but of course we can’t just throw money at them or they’ll end up bloated and wasteful and inefficient, like all those back office services we slashed to the bone. 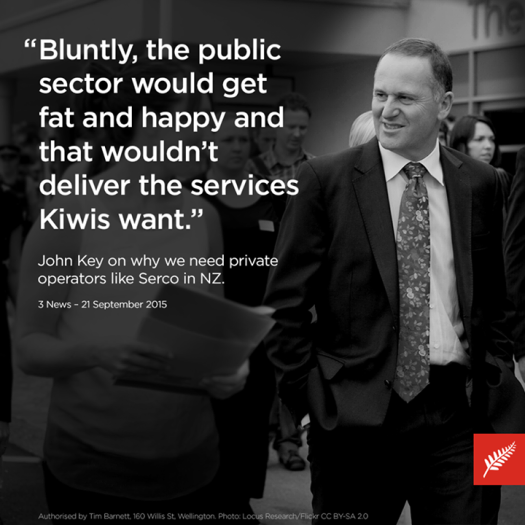 It’s fairly smart marketing. Very few people want to see a massive reduction in the public services they use – no one wants to see DOC scrapped or higher teacher:student ratios or longer hospital waiting lists. So when DOC faces cuts, it’s “office-based jobs” that are going. When they’re mashing agencies together willy-nilly it’s “[reducing] duplication of roles and back office functions“. When they decide to focus on preventative healthcare, it’s literally because “back-office cuts will no longer produce the savings required“.

We’re all just meant to accept that “frontline” workers like social workers, police and nurses aren’t just important – they’re all that’s important. We’re meant to buy the idea that anything which isn’t “frontline” – dealing directly with troubled kids, arresting bad people, treating hurt people – is a waste of time and money. Like so many of National’s successful memes, it just feels natural to accept that we should focus on the “core business” and get rid of anything which isn’t “core”.

The problem is that the work doesn’t go away. The notes have to get typed. The paperwork has to get filed. The timesheet reports have to get run. The roster has to be set. Someone has to fix the damn printer. And when there’s no one left in “the back office” to do it, somebody working on “core business” has to stop, find the phone number for the bloody technician, and explain to their boss why they had to pay for a call-out when the only problem was the yellow toner had run out.

That is a waste of time and money. That is a drain on frontline services. And the downstream effects are serious. How can the government tell if targets are being met when the data isn’t being recorded the same way or stored in the same place? How can supervisors measure people’s performance or oversee their workloads when everyone’s so busy the record-keeping is mostly taking place in their heads? How can people access services if their case manager is off sick and literally no one else can find or read their file?

How often do I see journalists or activists complaining that this Department or that Ministry has refused to fill an OIA request because either they don’t have the resources to collate the information, or they don’t even know how to find it? At that point, cutting the back office isn’t just counter-productive, it’s undermining our democracy.

We’ve taken a baby-step forward with Tolley’s admission that at least some CYF work can’t be outsourced to operators like Serco. We have to keep challenging the idea that the rest of the public service is up for grabs, challenging the false economy of splitting “back office” functions away from “frontline” work, and challenging the government’s deliberate strategy of running down public services until the point they can say “look, the state sector can’t deliver. Bring on privatisation!”