A classic National Party campaign poster did the rounds on Twitter following Farrar’s latest round of “Labour is now the extreme left” scaremongering. 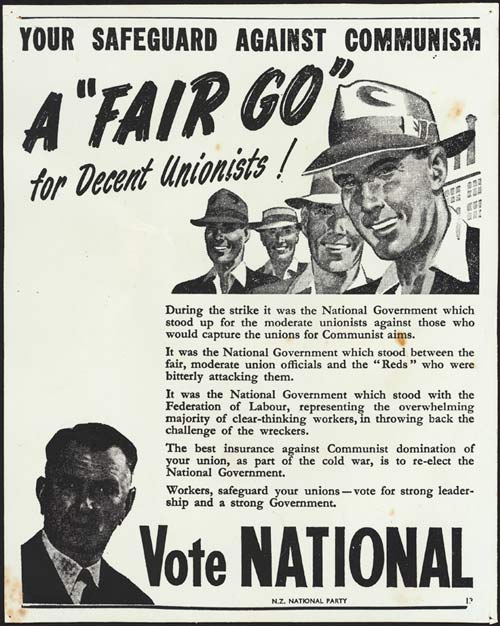 What’s funny is how little the right’s tactics have changed in 60 years. Even today, you get employers telling their workers that they’re very concerned that the unions they belong to are greedy leviathans run from shadowy smoke-filled rooms by men with Stalinist moustaches. The rhetoric is still about scary unions forcing innocent businesses to close their doors as the hardworking General Manager Corporate Affairs weeps into his tie.

The fairly simple logic – that it doesn’t really benefit unions if their members go out of work – is usually lost on people like Farrar. Many unions have in fact been key parts of helping businesses to lift productivity and innovate and create even more jobs.

Of course workers, and the unions who represent them, get a little stroppy when employers do things like try to take away guaranteed tea breaks and leak workers’ personal information to hate-bloggers like Cameron Slater, but that’s hardly socialism gone mad. That’s recognising basic concepts like fairness, safety, and integrity.

And those things are pretty scary, if you think the only important thing in the world is short-term profit.

The right to strike is recognised internationally as a fundamental workers’ right – though it’s not universally respected, like many other basic human rights. Global union IndustriALL notes five reasons why workers need the right to strike:

In honour of International Right to Strike Day tomorrow (18 Feb), the CTU is inviting Kiwis to send a message to 20 of New Zealand’s biggest businesses telling them to call out their association’s participation in the global campaign to remove the right to strike.

Back in 2013, National had the nous to trash Jami-Lee Ross’ thoroughly Orwellian-named “Continuity of Labour” Bill, which would have allowed employers to lock out workers and bring in volunteers or contractors to replace them, effectively destroying the power of strike action. The bill was apparently driven up through the National Party’s ranks, and was heavily endorsed by many members – but the government could see it was a step too far, and canned it at first reading in order to get their more “technical” law changes through – including the removal of basic guaranteed rest breaks.

As the third-term desperation sets in, I’m not sure they’d do the same thing again. A fourth term’s never out of the question but with the wheels already falling off the SkyCity “deal” and the Mike Sabin issue denting the PM’s credibility with the press gallery, it’s got to be looking further and further out of reach. So who knows what they’ll try to get through while they’ve got the chance?