Hats off to Richard MacLean of Wellington City Council for nailing the time-wasting pointlessness of the National Party’s most shameless astroturfer:

Mr MacLean said Mr Williams’ comments say more about the Taxpayers’ Union that it does about anything else.

He said the amount of time and money spent responding to the union’s truly pathetic requests is an enormous expense.

‘One day we’ll have to sit down and cost out how much their useless approach to official information requests is costing the ratepayer’.

Doesn’t Jordan Williams have anything better to do, like try to get footage of drunk MPs for his mates or breaching women’s confidentiality?

An old handle flickered back into life briefly this afternoon:

Rawshark – presuming the account is still held and operated by the hacker who exposed the dodgy shenanigans between the WhaleOil blog, corporate lobbyists and senior National Party politicians – started with a screenshot from the previous run, in which Cameron Slater and Jordan Williams allegedly discuss how to get damaging anti-wharfie stories into the media at the time of the POAL lockout. 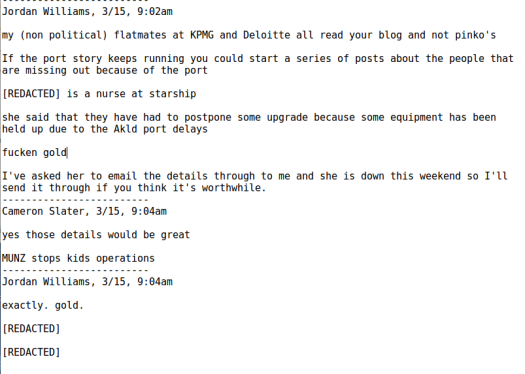 But something appears to have changed his or her mind.

So a bit more information has been released. (Highlighting added by me) 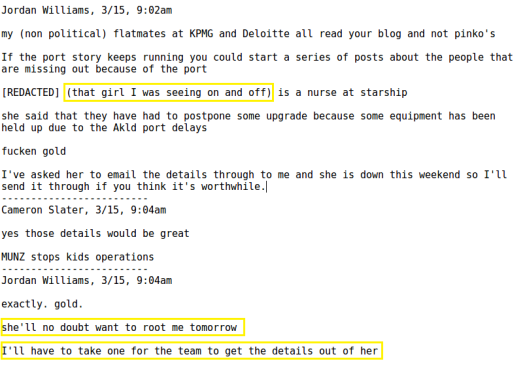 If this is ringing a bell, it should, and not just because it’s no surprise that Jordan Williams has an … odd perspective on women:

Heh remember these comments. Is Jordan suing to protect that reputation of his pic.twitter.com/Re0L3kIc82

It also sounds a lot like the way Luigi Wewege used sex to pressure Bevan Chuang to reveal details of her relationship with Auckland Mayor Len Brown.

Bevan Chuang told the New Zealand Herald she entered an intimate relationship with Luigi Wewege, a member of Mr Palino’s failed campaign team, who wanted her to expose the mayor’s infidelity when he found out about the affair.

“Luigi started pursuing non-stop about how I should tell on Len,” Ms Chuang said. “I was asked to record phone calls because that’s when Len would say all the dirty stuff.”

She says Mr Wewege wanted to publish the allegations on the Whale Oil blogsite, run by Cameron Slater, to ruin Mr Brown’s reputation before the election but she refused to swear an affidavit and produce text messages to corroborate her story.

It’s a bit hard to avoid the conclusion that rightwing men are so lacking a moral compass that they happily exploit sexual intimacy to manipulate women to gain political ammunition.

If women were doing the same thing to men they’d be denounced as cuckolding honeytrap Jezebels from every direction. That’s the patriarchal double standard for you.

So here’s my question, rightwing dudes: you love demanding that other people denounce extremism in their culture or party or religion. Are you going to denounce Jordan Williams and Luigi Wewege, and any other man who’s “taken one for the team” to manufacture a political scandal?  Or are you happy for us to assume that all rightwing men are sleazy creeps?

A quick note: I’m sure commenters will be quick to point out that leftwing men can also be abusive creeps, but show me (a) where a leftwing dude has used sex to gain political ammunition and (b) the bizarro universe in which I didn’t condemn that as scummy, too; otherwise sod off with your derailing tactics.

And a final thought, on a related topic: Rawshark’s brief return sent a very powerful message to the Dirty Politics crew. I’m still here. I’m still watching. And there’s a lot I didn’t reveal, so don’t make me want to come back.

Good on ya, mate.

“There are a few basic propositions with negative campaigning that are worth knowing about. It lowers turnout, favours the right more than the left as the right continue to turn out, and drives away the independents.”

One of the many dispiriting things Nicky Hager described in Dirty Politics was how attack blogs like Whaleoil and two-dimensional shell organisations like the Taxpayers’ Union have been deliberately created by the right to push their narrative on New Zealand politics.

Like the blogs that ‘need not be associated (in name) with your party or campaign’, the NZTU is an example of a supposedly independent organisation designed to back up the work of a political party. Its launch press release described it as a ‘politically independent grassroots campaign’, but it is no more politically independent than the election finance and anti-MMP campaigns. In fact, it was like a rerun of the anti-MMP campaign, with Jordan Williams once again as frontperson and [David] Farrar as founder and main strategist.

The strategy works on a big or small scale. Sometimes it’s specific stories – like Len Brown’s affair, which was “broken” on Whaleoil – and sometimes it’s just general ideas and memes which benefit the right – all politicians are troughers, government spending is out of control, unions are evil.

The point isn’t to stir up the Whaleoil or Kiwiblog commentariat into ever grosser expressions of racism, misogyny and generalised hatred. It’s to make headlines in the mainstream, offline media. To get specifically-chosen language into the common vernacular.

And here we are today, with the Taxpayers’ Union pointing fingers at MPs’ travel expenses – always an easy target and one which literally everyone, besides the MPs themselves, are happy to throw shade at – and specifically, at the extension of those perks to partners. Or as they put it:

‘WAGs’ Should Stay at Home

WAGs is a very particularly British term, applied to the partners (“wives and girlfriends”) of professional football (soccer) players. It’s pretty obviously demeaning and dehumanizing – you’re not a person, you’re a vagina attached to a famous man – and feeds into any number of boring sexist tropes about women as pointless accessories whose “proper” place is in the home.

In this day and age, and when applied to the partners of New Zealand Members of Parliament, it’s also wildly inaccurate, since:

But it is a snappy headline, precisely calculated to create indignation among one part of the population (containing me and my very best Killjoy Feminist buddies) and Daily Mail-esque class resentment in another.

And thus it was copy-pasted straight onto an article at Stuff:

And that’s how the machine keeps on ticking.

The irritating thing about it is that there is an important issue to explore here. The idea of partners (who yes, historically were assumed to all be wives) getting subsidised travel, even being automatically included, in work-related travel is a pretty archaic idea, still barely clinging on in some sectors and industries.

But that honestly doesn’t matter to the Taxpayer’s Union. They – and it feels somehow inappropriate to use a plural pronoun – weren’t created to fight issues of government spending on principle. They were created to sow National Party-favouring ideas into mainstream political discussion, and they’ll do that by any means necessary.

Specific reform of MPs’ expenses isn’t the goal. It’s about getting widespread acceptance of the idea that all politicians are troughing scum and all politics is dirty and why bother voting, it just encourages them.

Yesterday Jordan Williams – head of the Taxpayers’ Onion and courageous fighter for the right to call women ugly in private – sent out a tweet which got me all excited:

I’m looking for a household/family who earn over 120k, that might be willing to speak to a journo re whether better off than 6 years ago.

I’m a helpful kind of woman, and yes, my household’s income is over 120k. I got ready to put my hand up and aid Jordan in his doubtless completely-unbiased quest to help the media tell a balanced story about whatever it was.

Ideally non-political and with kid/kids. #rtp

Two strikes and I’m out.

There were some amusing, and some serious, responses to Jordan’s request:

@JordNZ did fit this until my wife was made redundant 2010

@JordNZ Really struggling here mate, had to downgrade the 7 series to a 5, and only dining out 3 times a week! Fiji trip looking marginal 2

But it made me think. Why the focus on a non-political person or family? I suppose the obvious answer is to ensure there’s no political agenda behind what a person chooses to tell the journalist, but in that case I wouldn’t be asking Jordan “runs to the Backbencher to film Winston Peters drunk” Williams to be finding my candidates.

The other possibility is: because a non-political person might be more likely to take the question at face value. Do I feel better off now than I did 6 years ago? Hell yes I do. Things now, compared to 6 years ago, are going swimmingly.

Of course that might have something to do with the fact that 6 years ago my household wasn’t earning 120k! Not even close! We didn’t own our house. I was still in university typing dictation part-time, he was at the beginning of his career.

Through a very fortunate series of events, including a decent dollop of sheer good luck, we are now very well off, especially for our age group, and depressingly high on the wealth distribution table.

None of that makes me think “gee, the government’s done a great job.” It makes me think: How are people raising their kids on the low wages in this country? How are other people my age ever going to afford to buy their first home?

And how can we survive another three years of National?

(I think the answer might be Voting Positive because we #LoveNZ.)